Posted at 14:15h in Uncategorized by Debbie Grifka 0 Comments
Share 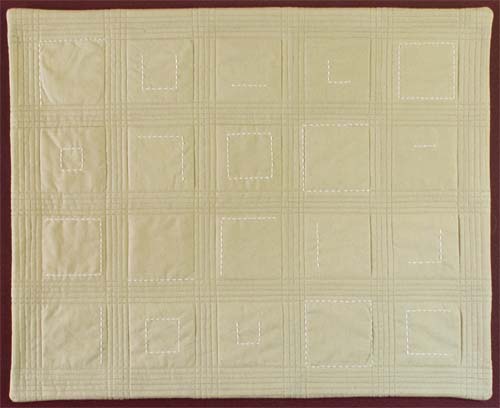 I’ve been trying to slow down my process for a while now.  It started last year with a recognition that I was rushing too much and not always thinking things through as I was working.  If you followed my 6000 Minutes project you’ll recognize these thoughts.

As I speeded up my process over the years, I stopped doing hand work as part of my “work” and left it only for “fun.”  That is, until I decided to hand appliqué my quarantine quilt.  I enjoyed it so much (more about that process when I finish the quilt!), that I wanted to continue to keep hand work as part of my regular work.  So, I decided to set up a hand project for June.

I have long admired the work of Sarah Hibbert (@quiltscornerstone on Instagram).  She does beautiful work with linen.  I’ve also been inspired over the years by some of the sashiko stitching I’ve seen.  Combine these things with some lovely linen/cotton and some beautiful white Aurifloss, both of which I already owned, and my June project started to appear.

I chose 4″ finished square blocks of the linen/cotton and decided to stitch squares and parts of squares of various sizes onto the blocks using the Aurifloss.  This was really more of an embroidery process than a quilting one, but I used only simple straight stitches.  While I enjoyed the actual handwork of these blocks, they didn’t take very long to do, so I ended up doing them several at a time instead of daily as originally planned.

I suppose my desire to slow down worked, as I tried several different layouts before I made my final decision and, even then, I trimmed away some of the border before quilting.  The quilting design was a bit of a challenge.  I hadn’t made a small piece like this using regular quilt batting in a while.  I began quilting by quilting in the ditch around the blocks and then adding a few parallel lines along the edges of the blocks.  The texture was great, but the quilting was grabbing too much of the attention.  I thought a simple diagonal line quilted through the blocks might be the answer. It wasn’t – the quilting completely took center stage and the original white stitches visually disappeared.  I unpicked the diagonal lines and added a few more parallel lines to the ones already surrounding the blocks.  That made the texture change more subtle and helped the stitching be more visible.  I left the stitched areas unquilted.  The blocks are a bit “puffier” than I like, but that is an acceptable sacrifice so that the stitching can show.  I did think about quilting around the hand stitching, but I don’t think that would have worked so decided to leave the piece as is.

I’m still mulling over my next hand project.  Suggestions welcome!