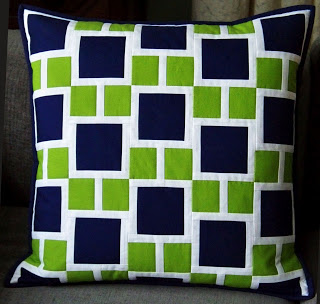 Posted at 22:51h in Uncategorized by Debbie Grifka 13 Comments
Share
I’m participating in a new kind of pillow swap on Flickr called A Modern Quilted Pillow Swap.  Tiina of Cotillelo dreamed it up.  Instead of being assigned a partner and stalking them and hoping for clues and feedback and then stressing that they’ll be disappointed by what you made, you just make a pillow and send the picture to Tiina.  She posts all the pictures so nobody can tell who made what.  After the deadline, everyone votes for their favorite pillow, 2nd favorite and so on.  Then, the person who made the pillow that gets the most votes gets their first choice pillow.  The person who made the pillow with the second most votes then gets their first or second choice pillow (depending if they chose the same as person #1) and on down.  I can’t wait to find out which pillow will be mine!

When it came to making the pillow, I had two choices.  Actually make what I wanted to OR try to psych out what other people would like so my pillow ranked well and I’d get one of my top choices.  I’m not so good at figuring out what other people think, so I just made a pillow I wanted to 🙂  I’ve had this idea about framed squares linked together in my head for a while and decided this was the time to work it out.  Strip piecing made it go pretty quickly.

I wanted to put a zipper in the back since I think it makes the pillow fit the form better.  I’m trying to use things I have instead of running to the store every 5 minutes and I had a zipper that was the right length and close to the right color, but not quite.  I decided a zipper with a flange covering it would be a good solution.  I’ll be mailing out my pillow tomorrow – I hope the recipient enjoys it!